I had the wonderful pleasure of being escorted to The Bates Motel & Haunted Hayride by Xander this year. Now you have seen a few reviews of this particular attraction from my beautiful best friend, but this year I thought I would take the time and tell you what I think of this place.

We always want to go to all of the haunted houses in the area, but we aren’t rich or have that kind of time. Every year we want to plan ahead, but we realize it’s two weeks until Halloween and Bates Motel is our automatic go to. That isn’t a bad thing. If anything, it is a huge compliment.

We know what the price will be, we know where it’s located, we know we are getting fried oreos and we know we will have fun.

We arrived at the muddy cold farm grounds EARLY. Being this close to Halloween, we

assumed that the place would be packed and earlier is better. However, it was nearly pouring rain as we were driving and was still drizzling pretty strong when we arrived. After we retrieved our tickets (paid online beforehand, an easy and quick process to get in), we hid in the merchandise shop for a bit, freezing Xander bought a hoodie, very comfortable and reasonably priced, and plotted what we were going to do in what order.

We took a few moment to watch the Coffin Ride. I tried to convince her to go with me but she refused and there was no way I was going to do it by myself. You climb into a coffin that plays audio and bumps up and down. It lasts about 2 minutes and you are all done. The few people we saw enter the ride enjoyed the experience. This year they also had an onsite Escape Room to promote their Escape Rooms that just opened up in West Chester, PA. We did not do the on site mini escape room they had, but are interested in going to their main site in West Chester.

Now even arriving at 6:15pm, it was dark quickly, which is what you want when you go to any type of haunted house. We typically start with the maze, however the ground was muddy and we were told we’d have to wait a bit, so we made our way to the Haunted Hayride. We stood in line until past 7pm. Now we have never been there that early, so we didn’t know that it appears most rides don’t open until 7pm. We talked and my first jump scare happened. Now, if most of you don’t know, I don’t scare. Not easily, at least. I wasn’t paying attention and noticed Xander staring over my shoulder, turned to a face off with a  ghoul and jumped. I don’t scream, but I do jump. In the 3 times that I’ve been there, I have only been jump scared once. Yonight I jumped 4 times. We won’t talk about how many times Xander jumped (for your information, it was A LOT).

Climbing into the Hayride is never fun but we welcomed the warmth of the fire displays. Riding along under the Dragon’s Mouth, we were witness to many a zombie, maniac, demon, abomination, asylum patient and some things I have yet to identify.

One of the many things that I love is that in coming back year after year is watching the whole place evolve. They had many new animatronics this year that I don’t remember being there last year. All awesome, my only regret was that many of these amazing monstrous beings had no sound. They would jump, their mouths would open and no sound. I do understand that sound would have to be added, the addition of speakers and players. I get all of that, but I feel like it would finalize these terrifying additions. I love beats, baddies and ghouls, but without sound they really didn’t come to life for me. 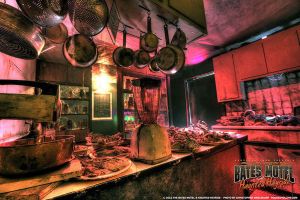 I did also miss being closed in on the Hayrides. I wasn’t sure if they didn’t do that because they were running behind or if they stopped it all together, but it was missed this year. Other than that the rides were great. The cold and wet didn’t stop the actors from jumping out and giving it their all. It was a chilling start to the night.

Deciding to bare with the cold, we moved onto the Maze, Revenge of the Scarecrows, I think was the name this year. Here, I jumped twice, I think, mainly because I volunteered to go first (which I will never do again because there was far less screaming from the other unsuspecting people in the group), and people would jump out from behind doors.

I always feel bad going first, I feel that they work so hard for that jump or scream and typically I disappoint them with a simple… ‘Hey’ or ‘Sup’ and head nod. Sometimes I just laugh, I think it’s hilarious. Again, the upgrades were great. Actors well placed. Rooms spot on and the clowns scared Xander appropriately. I want to thank the clown that followed her as we continued, that filled my heart with joy.

** Side note, friends, I want to be sorry for creeping out the people around me while we were there. I’m not. I uttered things such as, ‘That’s what I came for’ after a girl apologized for screaming. ‘Thank you, Daddy’ when an actor told me to take my medication (the Asylum section) and ‘Next time we need more screamers, they make it fun.’ I’m not even a little sorry, I LOVE Haunted Houses, I’m just representing me **

So we moved onto the Haunted House. Some notes, I love the addition of The Nun and Annabelle. I got jump scared once or twice. I can’t remember, more people around doors. I didn’t volunteer to go first. In fact, I pushed Xander against a wall and let the teenagers go first. Best. Decision. Ever. They screamed and it filled me with joy… I’m aware of how twisted that sounds. I don’t care. Again, I don’t want to reveal and ruin anything. They put together a thrilling show, actors were on point and dolls are hella creepy.

(One actor did rest his head against Xander and tell her she had beautiful ears. I think she liked it.)

Now, this wasn’t my favorite year. That had nothing to do with Bates Motel. We didn’t check the weather report before we went, a huge mistake on our part. It was a bit slippery in some parts (the staff warned us that is was slippery and asked us to walk carefully) and due to the rain it seemed less crowded. Also there were less actors walking around, but again, we felt this was due to the weather. It was also very cold, we didn’t dress for that. I dressed to look cute, which I was. Xander came home with more layers on than she left.

We still had a blast, we laughed, she screamed, we made jokes and had a FANGtastic time. Sorry, not sorry. If you live in the area and haven’t been to Bates Motel yet, we have no idea what you are waiting for. You simply must go and have one hell of a time.

Do you know of a Haunted Attraction that we should review? Let us know your favorites in the comments.