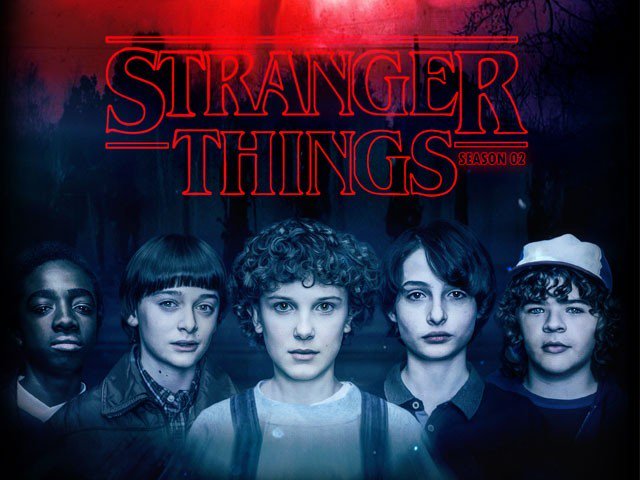 If you haven’t watched the first season of Stranger Things, then I suggest you check out that review and then decide if you want to watch it. This review is only for the second season. Also, THIS REVIEW CONTAINS SPOILERS! YOU’VE BEEN WARNED!

I binged watched the hell out of season 2. However, I wasn’t patiently waiting for it to come out. I didn’t start watching it day one. I didn’t pour over internet theories before it came out. I loved season 1, don’t get me wrong, but I was worried about season 2.

Let’s get the hate out of the way.

Season 2 felt just a tad off to me and I will explain why. The end of season 1 could have easily been the end. We didn’t know what was coming next. It was tied up in the neatest little bow possible with two exceptions. We were lead to ponder if Eleven was still alive. Also, what the fuck did Will cough up in the sink?

Season 2 didn’t wrap up in that same bow. There are a lot of unanswered questions and if you ask me, everything with her sister felt… disconnected? Maybe that isn’t the proper word, but work with me. Of course, I can understand everything that lead up to her going to Mama. Mama wants me to go see this girl… Okay, that isn’t what I got from the vision, but I’m not you. So, she ventures off to find her sister and the feeling of these scenes were so far removed from what was happening that I had a hard time smoothly going back to Hawkins.

BEFORE YOU HATE ME… I understand that it was character development. I am sure that this plot will be revisited in season 3. In fact, it felt more like a setup for season 3 than it actually belonging in season 2. Again, this is my opinion and I didn’t love it any less. I just felt uncomfortable. I Love Kali by the way. Love love love. PS, where the fuck are the rest of the numbers?

So, besides that, I don’t recall any other issues I had. Well, I did want that bitch Billy to be eaten by a Demidog, but that didn’t fucking happen. HE DIDN’T EVEN SEE ONE. I mean, I straight up hate that motherfucker (not as much as his father) but damn did that bring up some left over high school rage that I will never address. That seething hatred can stay there. That might have been my only other issue, but that’s more of a personal preference.

Now, let’s talk about the awesome. Eleven/Jane is developing, learning, understanding, feeling and we are along for the ride. This poor girl was not only put through hell, but she also got worse, kicked it’s ass and got more hell for it! CAN SHE CATCH A FUCKING BREAK!

However, watching this journey just bonds us to her even more. I assume that most of us want to pick her up, hug her, put her in our pocket and feed her all the Eggo’s she wants. However, I found Will to be an adored pocket dweller, also. Again, this poor kid went through hell BY ACCIDENT and the hits just keep on coming.

He tries to be so brave and stand up to it, only to really get screwed over something fierce. I just remembered thinking, “holy shit that poor kid,” every 5 seconds. For seeing so little of him in the first season, he did so well in season 2 with not only that troubled weight on his shoulders, but also literally fighting to gain some normalcy.

AND BOB! OMG don’t get me started on Bob… I saw a lot of #justiceforbarb #justiceforbob before I even started watching. Thanks for ruining that, internet. However the question that came up was who do you want justice for, Barb or Bob.

FIRST OF ALL, not the same situation. Barb got dead and knew nothing about what was happening. Of course, she deserves justice. BOB IS A MOTHER FUCKING HERO. Holy shit! Bob the Brain deserved better.

He may have been nerdy and weird, but who isn’t? He found a woman he loved, accepted her two kids, loved them and tried to bond with that. He had a good job and loved to help. HE CAME OVER WHEN HE THOUGHT WILL WAS SICK, found out Will was in the Upside Down, not the woods, and he didn’t nope the fuck out. Then, he didn’t even ask Hopper to come guard him (which I would have) and went out to do what he did best. Salute Superhero Bob because not all heroes wear capes.

I think I just started ranting about characters and never spoke of the actual story. I’ll throw out that Dustin is an adorable dumbass and say that the story was great. I felt awful for everyone stuck in the situation and wondered how the rest of the town seemed to notice 100% of NOTHING this whole time. Sheep.

I wasn’t a fan of all the Nancy boy drama. I can always do without extra romance issues. I do say “extra” because we can’t forget about the Max love triangle in all of this. That lead to interesting drama, but little character development for Lucas, or at least I think it could have been done a little better. Show of hands on how many people think Billy is a racist? If he is, I do appreciate them removing derogatory words from the script. I know that people will throw words around trying to be authentic, but there is a line and the actor is a kid. It wouldn’t have sat well with me at all.

Season 2 is good but sitting here, reflecting upon it, I feel some of the Sequel Blues. The first is always better, because we aren’t shocked by what is being presented to us. As much as they brought to the table this time, the newness of it, I felt a couple of characters lacked much needed development. I had issues with the Jane/Kali story line ( I was really hoping Kali would have shown up at the end to help) and there was to much left unresolved, to me at least. I also found that investigator to be creepy in a special way.

That being said, loved the Demidogs, loved the Shadow Monster, loved thinking outside the box, the map, the heaters. POOR BARB’S PARENTS! Mad Max stood up for herself and poor Mamabear Steve! Which honestly, I’d never thought I’d say that about a popular kid, like ever. He stuck by those kids, but I guarantee he’s never having any. Hey Steve, sweetie, let’s have a baby! NO! NO! HELLS NO! They grow up to be little shits that jump into tunnels and set demons on fire. HELL NO! And Steve is carted off to the insane asylum and never heard from again.

I digress. Season 2 was wonderful, but definitely lacking in a few areas for me. Let’s hope for a strong season 3 and cross our fingers that Billy gets bit in the nuts by a demidog.

Do you agree? What did you love or hate about season 2?