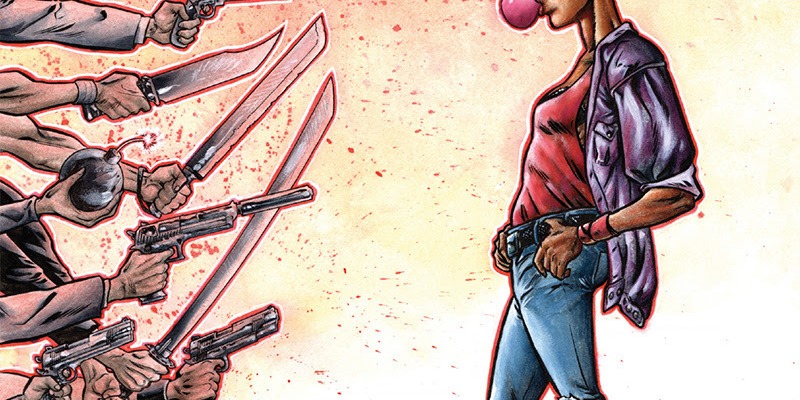 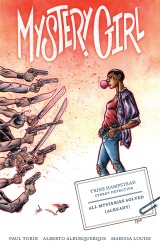 Trine Hampstead lives in London. Trine knows things. Possibly, Trine knows all things. Except for how she knows things. As the comic opens, Trine is opening her space for fortune-telling (she’s a “sidewalk detective”), and we are introduced to her neighbors, and her gift, as she solves her neighbors’ mysteries. She helps with any problems, big or small; a dog’s missing ball, a Metropolitan Police Officer’s questions about a criminal. We are also introduced to a hit man, hired to find missing scientific journals, who kills for fun. As it turns out, what the hit man finds is at the center of the mystery, and Trine knows what the journals hold. The mystery points to Siberia! But, the hit man decides that Trine should die…

Paul Tobin is mostly known for his Marvel Adventures comics (several comic book titles published by Marvel Comics for a younger audience), but has also written stories for DC Comics (Batman, Superman), Dark Horse Comics (Plants vs. Zombies, Bandette), Dynamite Entertainment (Bionic Woman), and Top Shelf Comics (Gingerbread Girl). Along with Spider-Girl (v.2) and Models, Inc., both for Marvel, Paul has written a number of comics starring female leads (there are more that didn’t make this list!). In Mystery Girl, I find Trine to be a very real person. Sure, she has strange powers that can’t be explained (yet), but she acts real, and I want to see how she manages the secrets she knows, the secret she doesn’t know, and a hit man bent on killing her. I credit that to Mr. Tobin.

Alberto Alburquerque is an unknown quantity, for me. This was my first exposure to his work, and I wasn’t able to find substantial material on him on the internet (in English, anyway, so maybe I did find more than I thought…). However, I find his art to be an interesting mix. Much of the art is a little too “cartoony”, for my taste, but I see real expressions and emotions in his characters’ faces, and all of the characters are unique in their looks. Also, on some pages, I see hints of Michael Golden, one of my favorite comic artists (mostly known for his cover work for Marvel Comics, but also for interior art in Micronauts and The ‘Nam).

Mystery Girl #1 will be on shelves on December 2, and will be published monthly.

Mystery Girl, and other great comics, can be found at Johnny Destructo’s Hero Complex located at 4456 Main Street in Manayunk, PA! Visit him on Facebook at https://www.facebook.com/jdsherocomplex/