This is the second installment of my Eli Roth Triple Feature Review. In this post, I will discuss the movie Eli Roth Presents: The Stranger. 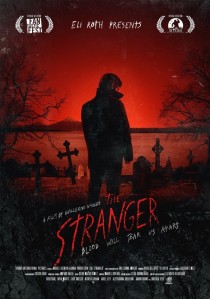 What’s it about?
The Stranger follows a “sick” man named Martin (Montt), who shows up at the small town home of teenaged Peter (Duran), looking for his wife Ana (Izzo). Peter informs this stranger that Ana is dead, shows him to her grave and leaves. Mourning her death, Martin is jumped by a group of men led by Caleb (Levy), who leave him for dead. When Peter finds him and takes him home, bloody and fatal events start to happen.

What did I think?
It’s a vampire movie, but they don’t once say the word vampire. They continue to refer to it as a “sickness,” but the fact is that Martin’s blood has healing powers, he can regenerate by drinking the blood of other living beings and he burns in direct sunlight – that spells VAMPIRE. I don’t like when vampire movies try to hide the fact that they’re vampire movies. I understand that Twilight ruined it for everyone, but that doesn’t mean you have to run away from it.

The acting was just okay. Lorenza Izza wasn’t in it enough, if you ask me. Cristobal Tapia Montt and Nicolas Duran were amazing. They played off of each other very well. You could really see a good dynamic there. Ariel Levy was awful, just like in The Green Inferno. He’s not connected to his character enough, which causes his performance to fall short. I had the same problem with Alessandra Guerzoni, who played Peter’s mother, and Luis Gnecco, who played Caleb’s cop father. Nobody was believable.

Do I recommend it?
I’m going to say no. Don’t waste your time. The movie is entertaining, but it lacks any real substance. It would have that substance if the supporting cast were different, but it is what it is.

Tell me what you think in the comments!