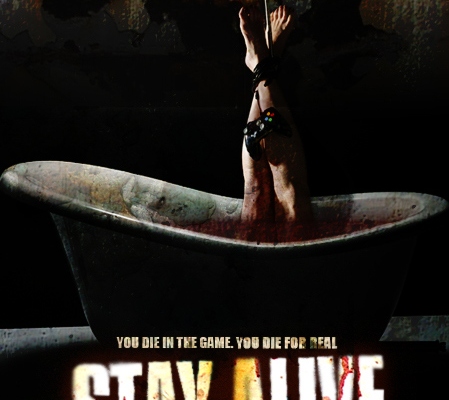 Stay Alive is by far one of my favorite horror movies. It totally helps that I am obsessed with video games (Drool, boys. Drool), so this was right up my alley. I totally excited when I rewatched it and realized one of my favorite characters from Heros (TV Show) was in the beginning. Albeit, he didn’t last very long, but it was still amazing. Now to me, by far the most disturbing scene in the entire movie is the scene with the pig mask. I highly enjoy every aspect of this movie, with the exception of a few small things and one large detail.

I do find the main character slightly annoying, but I find most main characters slightly annoying, they always seem so whiney to me. Oh, poor me! Oh, I’m scared of this! Oh, I can’t believe this is happening to me! Especially when 50% of the time, they walked right into the situation they are so pissy about. Oh, nothing could go wrong when I read this prayer aloud! Really? Really?! Idiots.

Hutch means well, but I find him a bit whiney. Not bad looking, but still.

Abigail is very sexy (keep drooling, boys). She is very doable, even though her character is seemingly random for most of the movie. And as awesome as I think she is, I find myself asking, “Who are you and why are you still here?” I understand she is friends with the deceased girl you see for about 30 seconds in the very beginning, getting banged by pig-boy, but she just seems so out of place and a bit awkward. However, awkward is the new hot.

October makes me jealous and leaves me drooling. Sweet, smart and a hot goth girl. I don’t know if I want to be her or do her…. Hey, why not both? I adore her. I hate what happens to her; I hate the moment she allows anger to cloud her judgement and make her do something stupid.

Phineus, though not hot is pretty awesome when he is not being an insensitive jerk, which is fairly often. His ‘Sup, Mama?’ makes me giggle and it is now a term when talking to Xander. She is not nearly as amused by this as I am and the look on her face screams it at me, but it is worth it.

Swink is actually cool, in his nerdy way. This was amazing to me since I was never interested in the actor’s earlier show Malcolm in the Middle. I think the character was portrayed well and had me rooting for him more then Hutch at some points.

The story concept for Stay Alive is amazingly awesome. I love the graphics and 99% of the story line. You see, I love Vampires. It’s another obsession of mine that I most likely take way too far. I’m sure I scare guys off with my obsession, let alone other, ‘normal’ people (I’m sure those people are uninteresting, anyway). Either way, Countess Elizabeth Bathory is one of my favorite ‘Vampire’ stories, so there are a few things I was miffed about.

Countess Elizabeth Bathory was a hungarian Countess in the late 1500s to early 1600s. The story goes that she was obsessed with staying young and beautiful and that, one day, a servant cut herself and a drop of her blood landed on the Countess’ skin. Countess Bathory was convinced that where the blood fell, her skin was rejuvenated. At this, she slit the servant girl’s throat and drained her blood into a bath that she then bathed in. She was rumored to have done this over 650 times, taking servant girls all over the country. Her remaining servants helped her do this, allegedly. Setting out in her carriage, she picked up girls no one would miss or girls from families that had too little influence to investigate. She was discovered when she made the mistake of taking a young noblewoman who was indeed missed. They executed all of her staff and walled her up in a tower where she remained until she died. You can’t go around executing nobility.

Now that I’ve educated you a bit, you will hopefully understand my irritation. She was never in New Orleans and she never had a finishing school. I would have been much happier if they kept to her original story. I understand that people have to take liberties with stories, but to mess with my beloved Elizabeth is shameful.

The ending was wonderful, until the very end. They went through all of that for nothing. I am glad I have yet to see a sequel to this movie, and I hope I never do. Leave my lovely horror movie alone.

So yes, it could have been better. It was short on hot guys, but not hot ladies, so there was ample eye-candy to be had. The story was awkward at some parts, but not in any way horrible. It was indeed forgivable. Any horror movie could be better; there’s always room for improvement. We all have things we’d like to change about movies, but Stay Alive had very few of those moments.