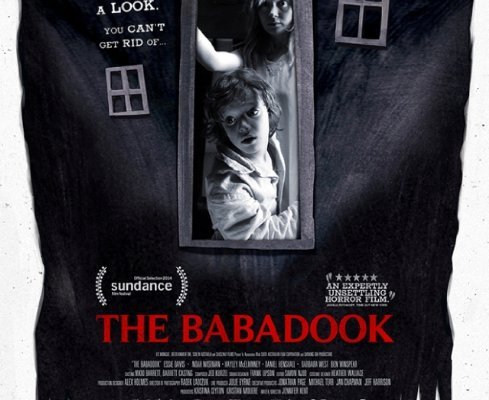 The Babadook, directed by Jennifer Kent, is a dark and strange tale that depicts what happens when an otherworldly creature overtakes the lives of a troubled widow and her oddball son. This low-key horror film eschews the conventional jump scare fear tactic in favor of the building of suspense, utilizes light to create a sense of the macabre, uses natural dialogue to tell the story, and employes talented actors who bring raw vulnerability to the roles.

The Babadook centers around Amelia Vanek (Davis) and her son Samuel (Wiseman). When a strange red pop-up book, called “Mister Babadook,” appears on Sam’s bookcase, naturally they break rule #1 and read it out loud as a bedtime story. After they both read aloud, “ba-ba DOOK! DOOK! DOOK!,” which is the phrase that invites the Babadook into your home (how very Beetlejuice of them), Amelia begins to notice that Sam is acting strangely. His odd outbursts turn aggressive as he screams about “the Babadook” and how he doesn’t want his mother to die.

Unlike other horror movies, The Babadook uses smooth scenes and subtle imagery to create a sense of fear, as opposed to quick scene breaks and sharp imagery designed to make one’s heart stop. Each scene flows naturally into the next so there is no point where one’s heart jumps unnaturally into their throat. This is a welcome change to modern horror, as most directors opt to make their audience jump instead of create a prolonged sense of fear.

As is the case with most horror movies, the director plays with light/dark in order to convey the sense of the macabre. The colors are muted and plain during the day and, at night, the setting is dark as Kent imparts the idea that there’s something lurking in the shadows, causing the viewer to associate the Babadook itself with darkness and evil. This builds suspense, causing the viewer cower in their seat.

I would like to give props to the screenwriter, as well. The dialogue is natural and realistic. Repetition of words and phrases, such as “ba-ba DOOK! DOOK! DOOK!”, “die” and “let me in,” creates an atmosphere of fear, anger and mistrust. A lot of the exposition is found in the dialogue, but it’s not obvious as exposition. The writers are able to tell the story through the dialogue without making it seem as though the dialogue was telling the story. Way to go, writers.

The acting in this film is also phenomenal. Essie Davis shines as she takes on the roles of victim, villain and savior throughout the story. Noah Wiseman does a wonderful job of filling the horror archetype of the creepy child, as well as the role of the misunderstood, fatherless oddball. Together, they do an amazing job depicting a troubled mother-son relationship, which is not an easy feat to accomplish.

Overall, I loved this movie. It was able to create fear without using jump scare tactics, which is something the modern horror industry can learn from. The lighting was used perfectly, the dialogue was natural, and the acting was emotional and raw. I would say it definitely deserves its spot on the Top 100 Horror Movie list. I highly recommend it.